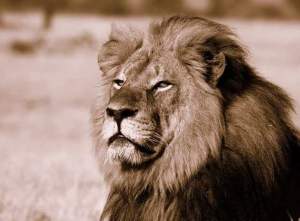 Since the killing of Cecil, Zimbabwe’s beloved lion, social media have exploded with self-righteous anger. Many are angry at the confessed killer, calling for him to be hunted down. Others are angry at those who are angry over Cecil’s death, for a variety of reasons: because Black Lives Matter… because hunger… because the Confederate flag… because abortion… because farm animals… because Palestine… because cancer…

Each person and group promotes her/his cause as more relevant, more important, and condemns the alleged hypocrisy of those who ―in their view― care more about one African lion than about _________ (fill in the blank).

All forms of oppression and all suffering stem from the wrong views of separation (“I” am unlike “them”) and supremacy (“my” opinions and desires come first), and these in turn generate the afflicted emotions of attachment, aversion, and indifference.

As long as we take every opportunity to express anger, instead of deepening our compassion and expanding our view to encompass all sentient beings as interrelated and interdependent, our self-righteous indignation is only an expression of afflicted emotions, and will necessarily lead to more suffering.

Hatred does not cease by hatred at any time.

Hatred ceases by love alone. This is the ancient law.