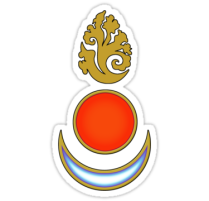 As long as delusion[1] has not ceased,

it is impossible for the manifestation of delusion,

the cycle of birth and death, to cease.

As long as the circulation of the vital winds[2] has not stopped,

it is impossible for the stream of consciousness[3] to stop.

While the stream of mind and mental events have not stopped,

it is also impossible for the external manifestation of delusion, the three worlds[4], to stop.

With the wish to transcend the three worlds, whose nature is suffering,

abandon all distractions and cultivate the profound Vajrayoga[5],

the sublime instruction[6] from the mouth of the excellent master.

In this way, the circulation of the vital winds and the mindstream will stop.

[1] Delusion is the inability to see things as they are: whatever exists as existing, and whatever does not exist as not existing, free of the extremes of exaggeration and deprecation, eternalism and nihilism.

[2] Although this term has many possible referents, in this case it signifies the karmic tendencies that compel sentient beings to act, incited by afflicted emotions.

[3] The ground consciousness, the repository of all karmic seeds, impressions, and formations directs all experiences in the direction established by previous actions.

[4] ‘The three worlds’ is a term that stands for all phenomena in the external and internal experience of sentient beings.

[6] Vajrayoga instruction must be received directly from a qualified teacher in the line of disciplic succession.

I am a Dharma student, and aspire to be a companion on the path. I trust that these texts can offer a general approach and basic tools for practicing the Buddha's way to enlightenment. ||| Soy un estudiante del Dharma, y aspiro a ser un compañero en el sendero. Espero que estos textos ofrezcan a algunos un mapa general y herramientas básicas para la práctica del sendero a la iluminación que nos ofrece el Buda.
View all posts by Tashi Nyima →
This entry was posted in Dharma View and tagged circulation of the vital winds, cycle of birth and death, delusion, Kunchen Dolpopa, profound Vajrayoga, stream of consciousness, The Fourth Council, the three worlds. Bookmark the permalink.