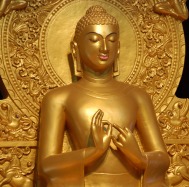 In an attempt to justify their appetite for the flesh of animals, some individuals allege that the Buddha permitted the consumption of meat under three conditions, and that the Buddha himself ate pork. These are patently specious claims.

The Pali text of the Jivaka Sutta, the source of the infamous ‘three purities’ argument, states:

I say that there are three instances in which meat should not be eaten:

when it is seen, heard, or suspected.

I say that meat should not be eaten in those three instances.

I say that there are three instances in which meat may be eaten:

when it is not seen, not heard, and not suspected.

I say that meat may be eaten in these three instances.

Clearly, the Buddha is stipulating here that if a monk inadvertently consumes meat that has been placed in his begging bowl, he is not at fault. His action is pure. However, if he sees, hears, or even suspects that there is meat in his bowl, he must not eat it.

Later commentators gratuitously inserted the phrase [that the living being has been slaughtered for oneself] after each iteration of the word ‘suspected’. The phrase does not appear in the Pali text. It is a spurious addition, making it seem as if the Buddha allowed his monks to eat meat when the animal was not expressly killed to feed them, or at least when they did not see, hear, or suspect it.

This interpolation is linguistically unwarranted. More importantly, it contradicts the unequivocal teaching of the Buddha on the matter. The Buddha gives extensive arguments against meat-eating in the Angulimaliya Sutra, Nirvana Sutra, Karma Sutra, Shurangama Sutra, Mahamegha Sutra, Lankavatara Sutra, Maha Parinirvana Sutra, and others.

In the Brahmajala Sutra, the Buddha Shakyamuni clearly exhorts his followers to adopt veganism:

Monks, should you willingly and knowingly eat flesh, you defile yourselves.

Pray, let us not consume any flesh or whatsoever comes from sentient beings.

Perhaps the most infamous of all revisionist interpretations is the one claiming that the Buddha died from eating contaminated pork. The term used in the (Pali) Mahaparinibbana Sutta to describe the dish that was served to the Buddha at his last meal is sukara-maddava, which literally means ‘pig’s delight’—a clear reference to truffles, a type of mushroom that pigs are keen to eat. The Pali term for pig meat is sukara-mamsa.

Carolyn Rhys-Davies, who served from 1923 to 1942 as president of the Pali Text Society, clearly noted the discrepancy more than seven decades ago, but proponents of carnivorism still trot out this fallacy today. Unless one is grossly ignorant of the Pali language, or is willfully misleading others, it is impossible to assert that ‘pigs delight’ means ‘delicious pork’, as if the Buddha had ordered a fancy dish at a modern Chinese restaurant.

In the Dhammapada, the Buddha says:

All beings tremble before danger; all fear death.

When we consider this, we do not kill or cause to kill.

All beings tremble before danger; life is dear to all.

When we consider this, we do not kill or cause to kill.

All beings means all beings, not just humans.